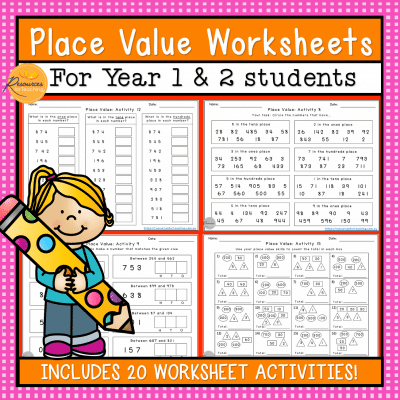 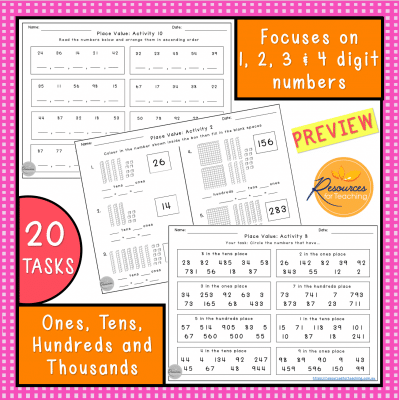 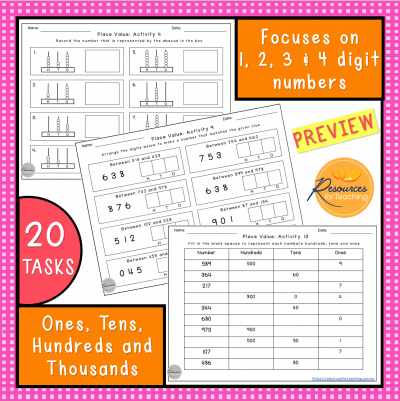 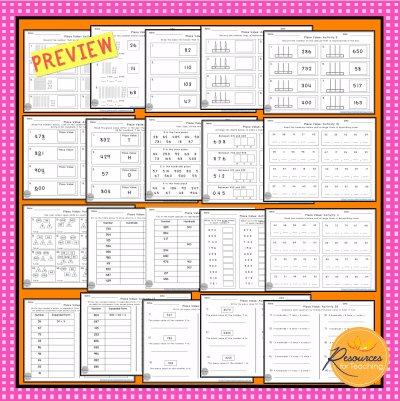 This download includes 20 engaging worksheets to improve your students place value skills. Perfect for year 1 and 2 levels, students will learn how to analyse, interpret and represent ones, tens, hundreds and thousands in many ways! It includes plenty of differentiation options so that you can cater to all the students in your classroom. It is perfect for whole-class activities, math stations, fast finisher activities, homework and revision.

The 20 worksheets include the following activities:

– Record the number that is represented by base ten blocks

– Colour in base ten blocks to show given numbers

– Draw base ten blocks that is represents given numbers

– Record numbers that are represented by an abacus

– Represent given numbers on the abacus

– Read a given number and determine what place value the underlined digit is (H for hundred, T for tens and O for ones)

(H for hundred, T for tens and O for ones)

– Identify a variety of numbers that have a given number in a given place value (for example 8 in the tens place: 287)

– Arrange digits to make a number that matches the given clues

– Arrange a variety of 2-digit numbers in ascending order

– Arrange a variety of 2-digit numbers in descending order

– Identify the number that is in the ones, tens or hundreds place

– Record the place value for given 3-digit numbers

– Record the place value for given 4-digit numbers 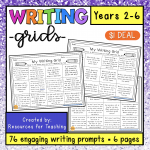 Sorcha from Kilmallock bought this product about 3 days ago 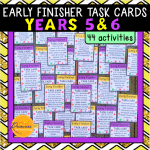 Mariam from Auburn bought this product about 2 days ago 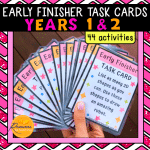 Stephanie from Sydney bought this product about 2 days ago

Deanne from west launceston bought this product about 2 days ago 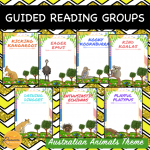 Yvonne from Kalbarri bought this product about 2 days ago
X